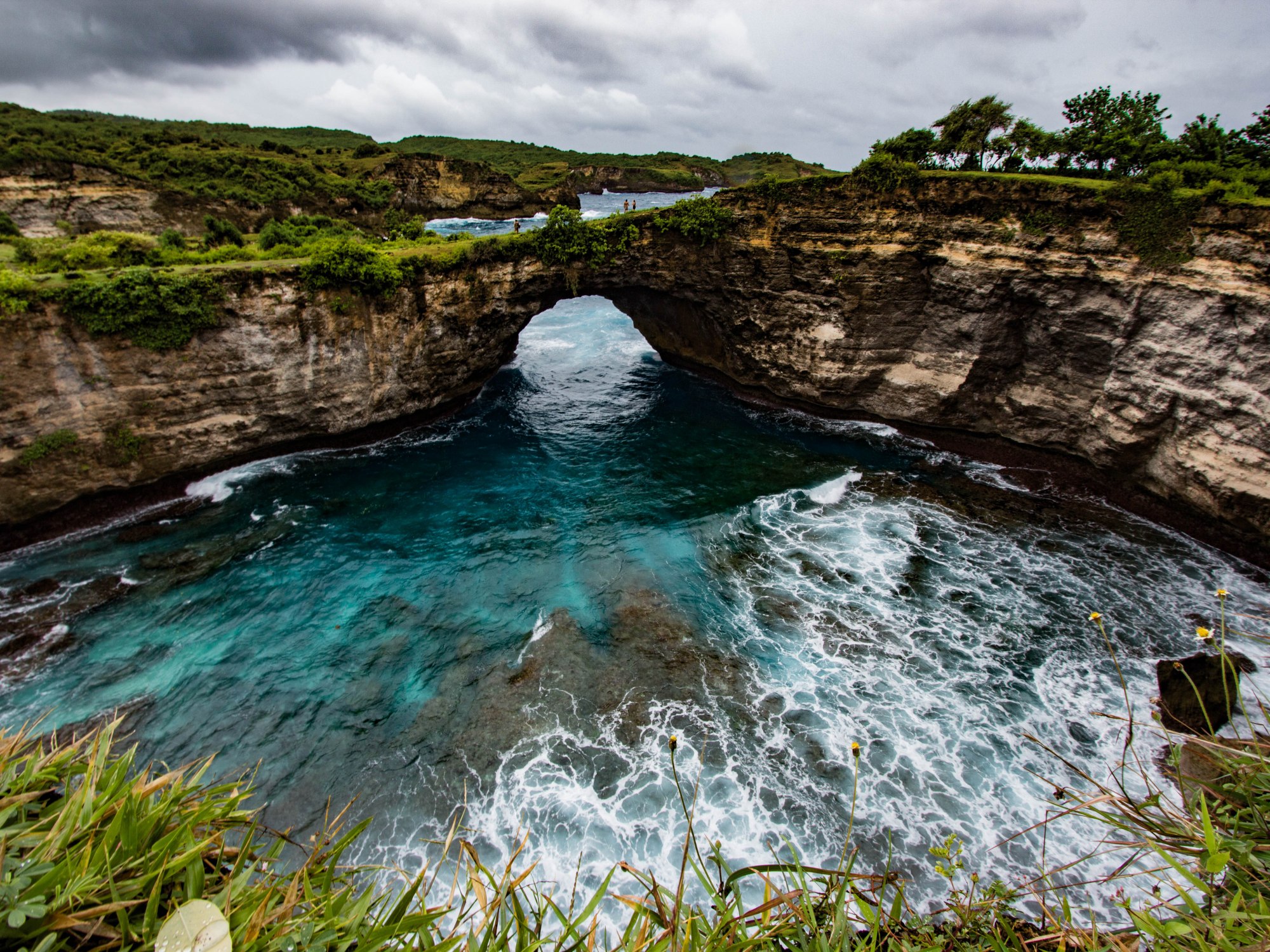 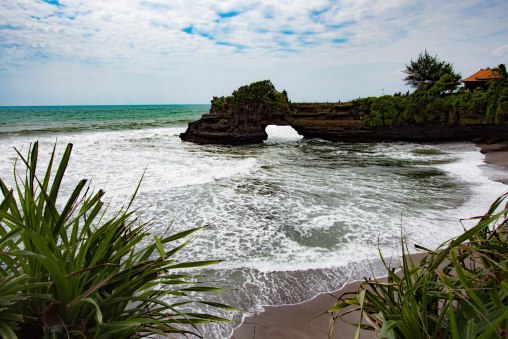 After a few days of doing regular touristy stuff in Bali like the paddy fields and beach sunsets, I was bored. After all, I travel alone for adventure. What is the point of going to the same places that everybody else goes to, the places that have been greatly modified to suit tourists’ needs! Whole of mainland Bali around Ubud and Kuta is a tourist mecca with patches of old Bali left here and there. I would have loved to go over to Lombok and Komodo islands but I was not very sure because of the rains. So, I decided to spend the last two days of my trip on the islands Nusa Lembongan and Nusa Penida.

Fast boats do not go to Nusa Penida. There are slow boats called ‘jukung’ from Sanur that take 90 minutes. Other option is to take fast boat to Nusa Lembongan and take the 20 minute slow boat from there to Penida. I decided to do the later and stay on Lembongan as Lembongan itself is a beautiful island. I realized, it is journeys like these that I travel for. Look at the views from Lembongan Cliffs Villa above! 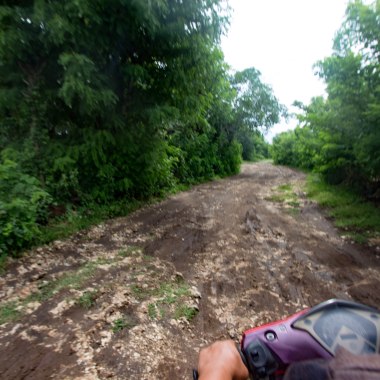 I arranged for a guide to take me around on Nusa Penida through the hotel. Roads on Penida are broken and do not exist in some places. It is better to hire a guide if you are not confident about riding a moped on broken roads. My guide Gede met me at the Penida harbor. He was super funny and entertained everyone at all of our stops. The naming system is Bali is something unique that I had never seen anywhere else. Everyone is Bali is named after their birth order in the family. For example, first born children are named Wayan, Putu(female), Gede etc, second borns are named Ayu, Anuk, etc and similarly 3rd, 4th kids have same names. So basically everyone in Bali has the same names! Some of them have been given nicknames by their friends; but you are sure to meet a lot of Putus and Wayans!

Penida is an undeveloped island with small, idyllic, one-street villages. The locals do not speak much English except for the guides. There are a handful of resorts and restaurants, but no backpacker or drinking scene like the other places in Bali. If you have been to Bali and thought about how Bali might have looked like before the Western surfers and yogis discovered it, or if you happen to go to Bali in the future and start thinking about old Bali, take a boat to Nusa Penida! 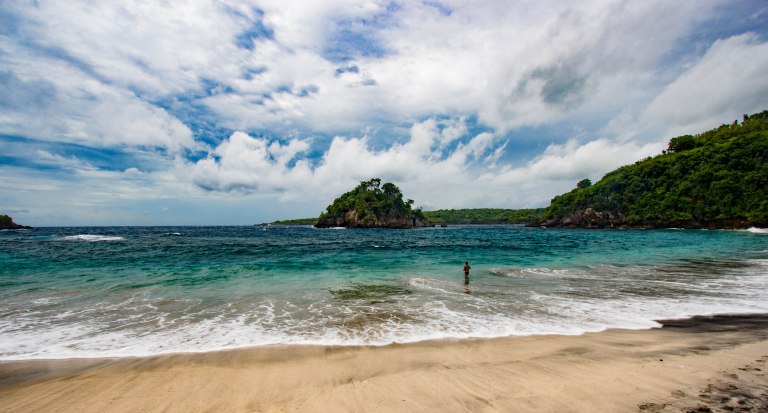 Our first stop was Crystal Bay. Many snorkeling and diving tours start from Crystal Bay. But because of the rains, it was empty except for a lone fisherman. How often do you get an empty, crystal clear beach like that for yourself?

“Broken road to Broken Beach” is the tagline for this beautiful hole in the cliff. There were only a couple of tourists other than me. Waves crashed and roared and I just couldn’t step away from this place for a long time. It was a windy, foggy day and the clouds kept rolling on. There is a certain drama and magic at the oceans that can only be witnessed on stormy days, it’s in the way the clouds unite with the waves!

I was starting to Angel’s Billabong when a heavy downpour started. I settled down at a small shop where I met two Indonesian girls Amber and Sara. They had just graduated from a university in Sumatra and studied Physics and Geology. They were traveling around Indonesia. We talked about India, Indonesia etc over cup noodles and white coffee. Shah Rukh Khan is pretty famous in Indonesia! And apparently, working in San Francisco and living in your own apartment is like a big dream come true for many young graduates! It was one of those moments when I was reminded that I should be grateful for my life and stop complaining. I hope I inspired these ladies in some way and wish them a bright future!

We walked down to Angel’s Billabong after the rain stopped. Angel’s Billabong is a natural swimming pool carved out in the cliffs. No, I am kidding. There is a big board that says ‘Do not swim here’. But many people do not follow the rules. Deaths have happened here and dead bodies have washed up to East Bali. Currents are strong, you have been warned! We climbed down the cliff a little bit and waited to see big waves. There were no big waves and so we returned back with just these pictures. 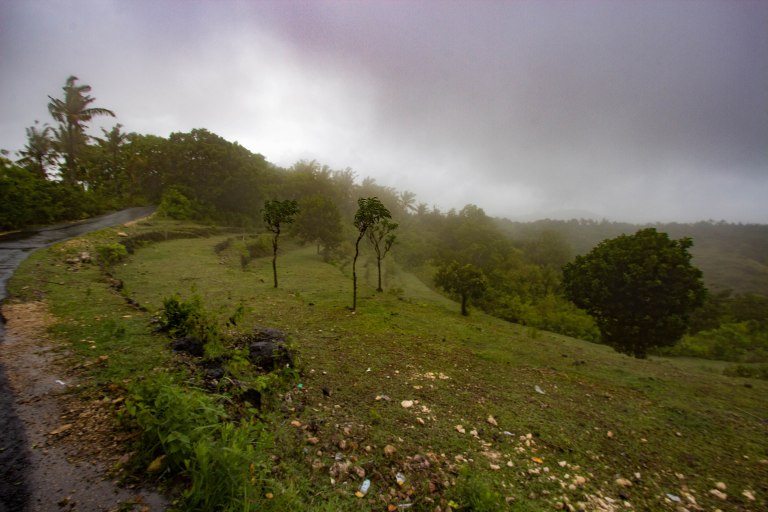 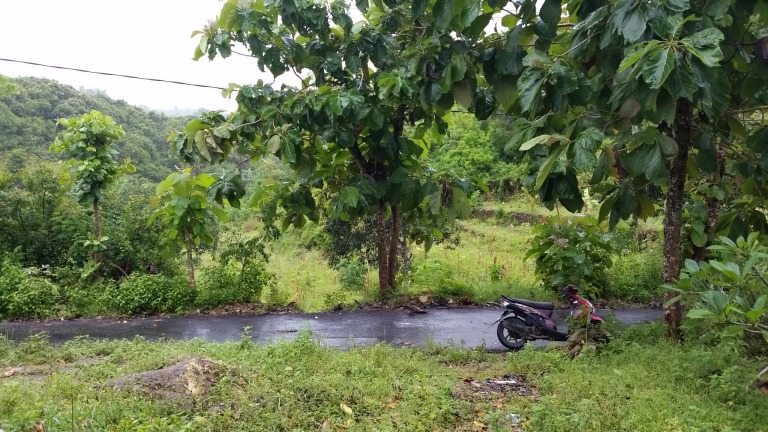 The rest of the day was spent driving around in heavy rain. My guide did not care for the rain much and kept driving until I gave up and asked for a break. 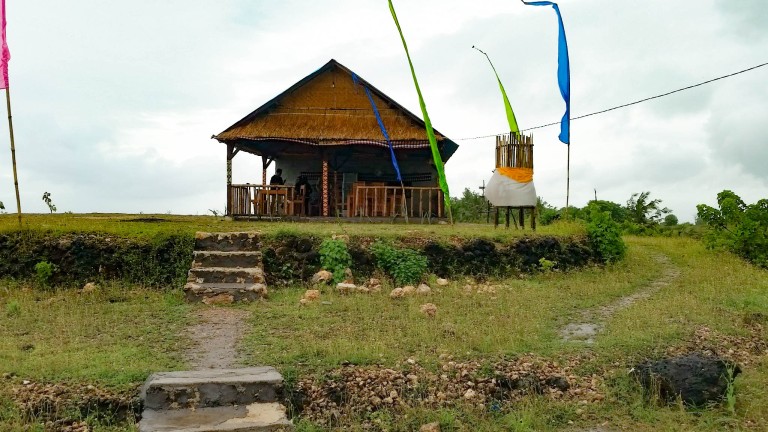 Last stop for the day was Kelingking beach in complete rain and fog. The views were magnificent even with all the rain and fog. We took shelter from the rain in a small, nameless restaurant along with other travelers. There was a small party going on in the restaurant with some beer, sweet Indonesian cigarettes and very sleek French cigarettes 🙂 I was wondering how Indonesians can smoke so much. It’s because of the peppermint flavored sweet cigarette with minute amount of nicotine. I left to the harbor from Kelingking beach, very happy and content. 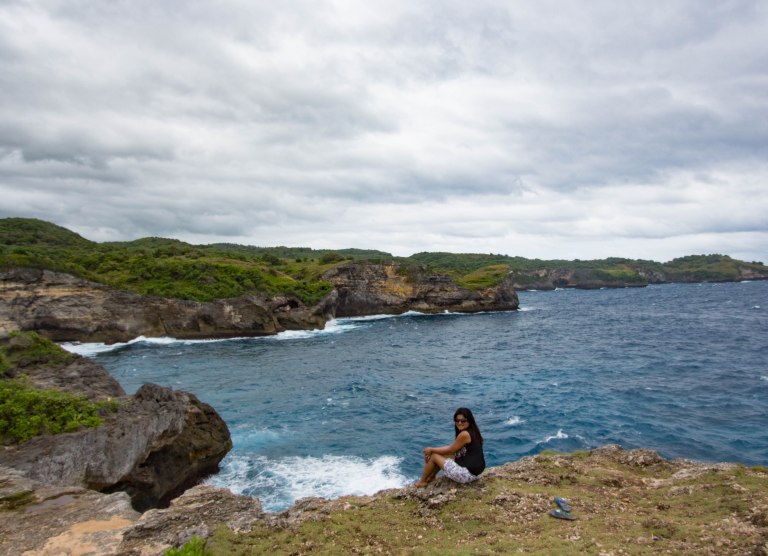 The ‘journey’ was not yet over. Once I got to Penida harbor, it dawned upon me that I was going to be alone on a small boat from Penida to Lembongan. I cannot swim and I am scared of water. I am also new to open sea boats. And there I was, drenched and covered in mud at 6:30pm, holding on to my dear life in a small boat as the driver chilled at the back of the boat. The storm had made the water rough and it was a very bumpy ride. I kept screaming but the driver was just chilling at the back. I only had myself to console that human beings and rough seas go a long way back, even before life jackets existed, not just when you were not given one on a stormy sea in 2017. 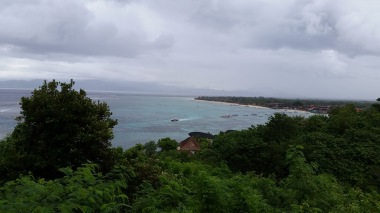 My plan for the next day was to check out beaches and a seaweed farm on Lembongan. But alas, it rained constantly from 7am to 12pm and it was time to leave. There was another boat journey in the storm, but this time there were 20 other people and a life jacket.

If I am ever back in the Bali region, I will definitely spend a couple of days on Penida and also on Lembongan. Even if I don’t, Penida will always remain a special place, for it’s stormy day, aqua blue waters and all the wonderful people that I met. Also, I had always thought that if not for an Engineer, I would have been a good psychiatrist. I think I would have thoroughly enjoyed being a journalist!

2 thoughts on “Nusa Penida, a little escape from Bali”